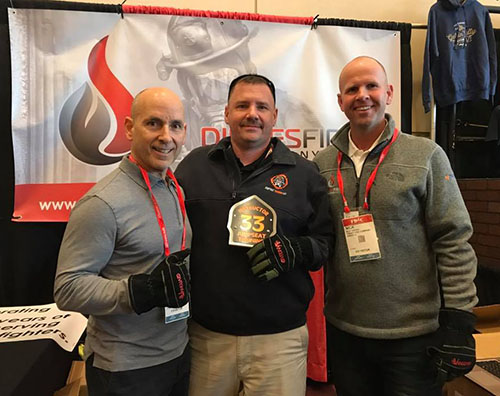 After years of using products that could not withstand the torture handed out by todays fire service professional’s, three leaders in the fire service industry, set out on a mission to improve personal protective equipment. Combining with a street level firefighter, a textiles authority and an experienced fire service equipment distributor; Vanguard Safety Wear was born to improve the industry. The Vanguard Safety Wear team combines all three areas needed to develop, produce, and improve personal protective equipment.

Behind every bay door, every truck window, and answering the call each day are the most precious assets to the fire service, the responders. Vanguard Safety Wear is committed to providing the best protection every day.

Vanguard is defined as a group of people leading the way with new developments and innovations. That is not only the definition inside our company name it is the mission of our company to push the limits of what is possible and lead the industry into the future.

Ryan is a Lieutenant/Paramedic currently serving with the Charleston WV Fire department. Ryan has over 20 years of fire service experience serving in volunteer, combination, and career fire departments. He is an active fire service instructor on many topics including live fire evolutions, hoarding fires, basic level firefighting functions, and fire dynamics. Ryan is an FDIC instructor and has presented at all major fire service conferences around North America. He maintains his blog at JumpseatTraining.com, podcast at Jumpseat Radio on iTunes, and shares his hoarding research at the ChamberofHoarders.com website. Ryan is married to the love of his life, Heather who is an educator in the medical field. Ryan and his wife Heather are the proud parents of two wonderful children, Alyson and David Dylan. The Pennington family enjoys spending time at the ocean and having adventures around West Virginia. Ryan can be reached at the following email address:ryan@VanguardSafetyWear.com

In 2005, Andy lead the design/development and certification of NFPA 1971 and 1977 for the start-up of the Pro-Tech 8 line of firefighting gloves. As the company Quality Manager, he instituted and managed company ISO 9001 and ISO 13485 quality management systems. He also assisted with the development of a distribution network throughout North America. Andy was the sales director in charge of the technical presentations delivered to state, county and major municipal fire protection authorities. Andy has over 25 years of experience in the textile and apparel industry.

Nick Dinges passion for the fire service began when he was a child riding to fire calls with his brother and father. He is the third generation in four generations of Firefighters in the Dinges family. The Dinges family has (9) members in the Fire Service. In 1997, Nick began his firefighting career as a Firefighter/EMT and participated in the Student-Live in Program while attending Western Illinois University. In 2001, he was hired by the Rockford Fire Department and became a Career Firefighter/Paramedic with assignments in some of the busiest companies in the Midwest. In 2008, Nick and his family moved to Amboy, Illinois, and he joined the Amboy Fire Protection District where he moved up through the ranks to the position of Captain. Currently, Nick lives in Sublette and is a Lieutenant and Paramedic with the Sublette Fire Protection District. In his spare time, he enjoys golf and is the President of Sublette-365, Instructs Smoke Recognition Training at SVCC, and is a Member of the Amboy Education Foundation and Amboy FFA Alumni Chapter. Nick joined the company in 2002, partnered in 2003 and became the Vice-President. In 2011, he took over as the Owner and CEO of Dinges Fire Company.

Copyright © 2022. All rights reserved.
Vanguard Safety Wear - This email address is being protected from spambots. You need JavaScript enabled to view it.